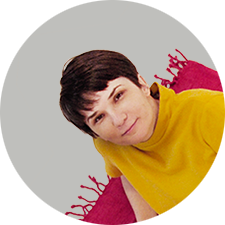 Gabriella joined the Baltazar Company after graduating from the Hungarian University of Fine Arts. She has been designing costumes for many of our plays since 2007. She worked first on Picasso: Creation of the World. “It was quite a challenge, since the concept was built primarily around the visuals, so we had to create some very striking images. But it was a great experience, as I had a large degree of freedom in designing them. The team at Baltazar is open to unique visual solutions, and the designer can participate in the working process as a true creative partner. That kind of approach is very inspiring,” Gabriella says.

Gabriella is a freelance designer, as well as a teacher at the Scenography Department of the Hungarian University of Fine Arts. She works in various fields, from TIE (Theatre in Education) companies to the productions of major theatres. She considers herself very lucky, because she is never forced to collaborate with people that she doesn’t enjoy working with. She considers Baltazar a good medium and community: she appreciates how open and free the actors are here; she likes their humour, and how critical they can be of the costumes designed for them. “With the designs I make for Baltazar Theatre, it’s particularly important for the finished costumes to not only look good, but also work well on the actors when they’re on stage. They expect that of me, too.”