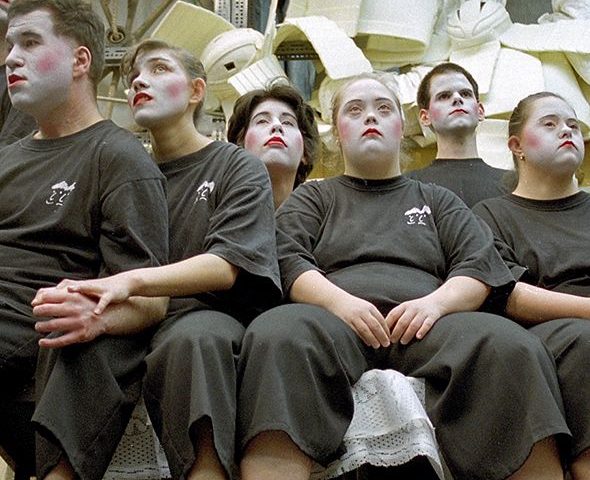 This performance is not about one of Samuel Beckett’s absurd dramas. It attempts to present the concentrated essence of the Beckettian world through the disabled actors of Baltazar Theatre. Beckett’s characters do not live up to society’s expectations, just as the actors in the play do not. Beckett loves his hapless characters with lyrical warmth. Those who perform this play also deserve this feeling of love. This is the point where Beckett’s characters meet the actors. Despite appearances, Beckett’s dramas are not pessimistic, and neither is Beckett Symphony. Its heroes are pitiful. Their victory against society is unquestionable. As Beckett said: “my plays should be considered a clown’s jokes, and performed accordingly. I like it when simple people laugh at them.” A clown’s world always seems cheerful from the outside. The secret of what lies beneath all the makeup and the baggy clothes belongs only to him. He plays and plays. Outside and inside. Which one is real?

“The wordless conversations are about a single situation. The same thing happens inside the truncated cone symbolising the sand dune from Happy Days, and the wheelchair duet. The love flowing from one person sets out towards the other, but somewhere it gets stuck. It never arrives.” Valaczkay Gabriella: Szimfónia Beckettre és bohócokra (Népszabadság, April 4, 2002.)