The central figure of István Vörös’s drama is a 16-year-old girl who is ostracised by her classmates because she can see the world better than they do. She sees it in its entirety, and she’s not afraid to tell them what she sees with raw frankness. This is a coming of age story that focuses on being different and on acceptance. Through presenting us with teenage rebellion and teenage feelings of being an outsider, the story shows us that there isn’t such a big difference between disabled and non-disabled people after all; that we all live in the same world and that life presents us with very similar challenges in the various stages of our lives.

“In the end The Comet attained its titular goal: through Üstike’s character, it gave an opportunity for introspection and not only for teenagers. It gave the viewer an opportunity to think: if one wants the world to change, who needs to make the changes? And all the while it spoke of being different and ostracised in a manner that made it possible for anyone to empathise.” (Fejes Réka, Pannon Tükör, 2019.) 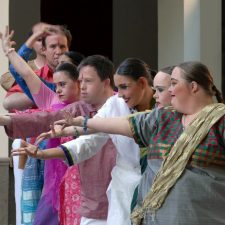 One Day with Amrita

One Day with Amrita